Start a Wiki
Ryuji Kisaragi is a 15-year old level 10 Breaker and the main protagonist of the series. His parents are both respected Breakers who travels too much to be with him.

He goes to a normal school and acts like a normal kid, until his second cousin, Eriko Nanao, returns from studying in the United States with a job offered for him. She tricks him into signing up to be the first member of her Seven Tails Lost Precious group and drags him on a trip to retrieve a contraband Lost Precious being transported by a criminal society called "FANG." Once they stole the contraband, they were forced to escape quickly. While being chased by members of FANG, the back door of the car opened. When the contraband began to slide out the back, Eriko had Ryuji reach back to get it. Then one of the FANG member shot the lock on the contraband and this caused it to open. A young red dragon, in the form of a human girl, emerged from the contraband, later named Rose. Rose used her fire to attack their pursuers and they managed to get out by the skin of their teeth. He and Eriko brought Rose home and learned that Ryuji and Rose had actually met a long time ago when they were kids. Rose had been looking for him and that's how she'd gotten captured. She has an almost child-like attachment to Ryuji, caring for him above all else, even going as far as to sneak into his room at night and sleep with him. Ryuji is a bit nervous about it at first but learns to accept Rose and her behavior towards him. Ryuji is extremely scared of frogs, as shown when he received a birthday present from Misaki Eto. His main weapon is called the "Slash Breath," an S-Class Lost Precious, which was given to him by Eriko. Ryuji can amplify his weapon's power by "engaging" with Rose; his sword becomes wrapped in flames and becomes overwhelmingly strong against his difficult Breaker opponents.

As told by Onyx to Ryuji, Ryuji's a Powerful Lost Precious called "Dragon Crisis," which allows him to engage with dragons or wield any powerful dragon weapon.

Rose: Ryuji is the one who woke Rose from her egg and because of this she is completely in love with him, Ryuji feels the same way but is to shy to really speak on it though he does tell her in the final episode of the anime he tells her and they share a kiss during the final battle with Onyx 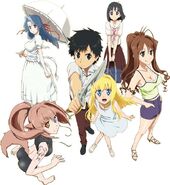 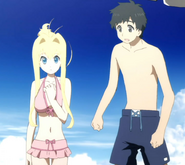 Add a photo to this gallery
Retrieved from "https://dragoncrisis.fandom.com/wiki/Ryuji_Kisaragi?oldid=4211"
Community content is available under CC-BY-SA unless otherwise noted.